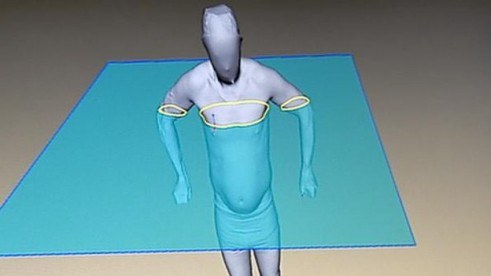 Twenty-six measurements were compared with figures from 30 years ago. The average weight now of men offshore is about 14st 3.5lbs, a 19% increase.

It has been done to help inform the future design of offshore installations and safety kit.

Well-equipped gyms found on most platforms were thought to have played a big part in the weight increase.

Another factor was said to be the increased ethnic diversity of the workforce.

Workers are now also taller, by about 3.5cm on average.

A mobile scanning unit was used to scan the bodies of the volunteers, producing a three dimensional picture.

Dr Arthur Stewart, of RGU, said: “We now have a unique insight as to how the shape of offshore workers has altered profoundly since the 1980s.

“Compared with that of a generation ago when many of the North Sea installations were constructed, the size of today’s workforce, together with the size increase imposed by different types of clothing, will enable space-related risk to be managed and future design for space provision optimised.

“In addition to the data on offshore workers, the study has generated an on-going capability for measuring the size and shape of the offshore workforce in the future.

“Despite challenging times for the oil and gas industry, this is good news for the offshore workforce and provides valuable information which will inform operational decisions and aspects of offshore installation and safety equipment design.”

‘Hugely beneficial’
Robert Paterson, of industry body Oil and Gas UK, said: “This has been a hugely beneficial collaboration between academia and industry.

“Data collected will inform all aspects of offshore ergonomics and health and safety, from informing seat design for use in helicopters and lifeboats, survival suit design and space availability in corridors and work environments offshore.”

It was announced last year that new rules were to be introduced on the size of oil workers travelling to and from offshore installations by helicopter.

Passengers with a shoulder width of 22 inches or more would be classed as “extra broad” and would have to sit next to a similarly large helicopter window.

Concerns were raised about larger passengers being able to escape from a crashed aircraft quickly.